SOLENT SHOWDOWN, GET YOUR TICKETS!

Tickets are now on sale for the UK’s most exciting sailing event this summer, the Emirates America’s Cup World Series Portsmouth, taking place across 4-7th June.

To celebrate America’s Cup racing returning to British waters, the organisers are offering a 15% early bird discount until 1 March 2020 across all ticket options, which can be purchased online via Ticketmaster 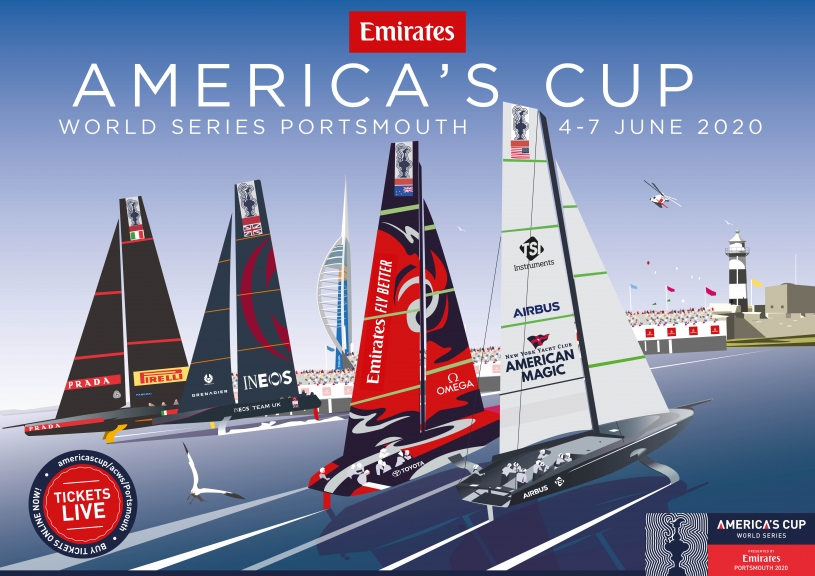 Portsmouth is hosting the second event on the America’s Cup World Series (ACWS) 2020 circuit and it will be the third time the city has hosted the racing. 2020 is set to be another exciting, entertainment-packed weekend, enjoyed by everyone. Teams will come together from across the globe; New Zealand, America and Italy to join the local home team, INEOS TEAM UK – led by five time Olympic medallist, Sir Ben Ainslie – for the fastest sailing show on the Solent.

The Solent is the most iconic and historic America’s Cup venue, dating back to 1851 when the inaugural Cup was a sprint around the Isle of Wight. Spectators can watch the action unfold across four days of highly-charged racing, during a two hour race window each day.

Sir Ben Ainslie, Team Principal and Skipper, Ineos Team UK commented: “We are really looking forward to competing in front of our home crowd again. The 2015 and 2016 America’s Cup World Series events in Portsmouth saw an estimated 250,000 fans line the Southsea waterfront. It’s so great that Portsmouth has been chosen as only one of two locations outside of New Zealand where people can watch the AC75 foiling monohulls in action. We are confident the racing will deliver a true spectacle.”

The Race Village Fanzone will open daily from 10.30 – 18.00 and you can choose from one day,  weekend and four-day event passes for general admission to the Race Village Fanzone, Premier Grandstand seating to a weekend of hospitality in the prestigious Emirates Lounge.  Children five and under go free and those aged six – 15 half price with an adult purchase of a general race village admission ticket.