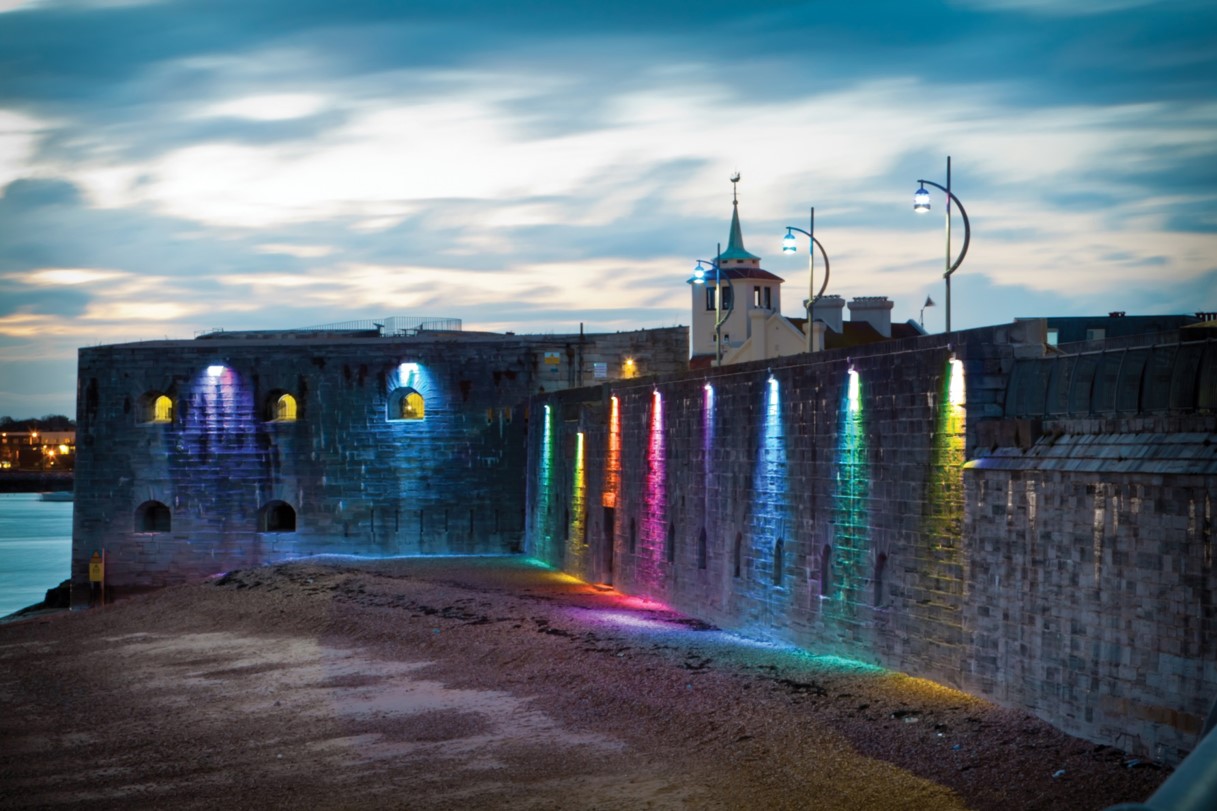 Portsmouth was founded about 1180 when a French merchant called Jean De Gisors founded a settlement in the South-West corner of Portsea Island. Jean De Gisors, owned land on Portsea Island as well as in the Gisors area of Normandy, France. In the Southwest of the island was a small sheltered inlet from the sea called the Camber. De Gisors decided that it was an ideal place to land ships and to start a town.

De Gisors divided up the land into plots for building houses for craftsmen and merchants and he started a market. He also granted land for the building of St Thomas Church in Old Portsmouth.

In 1194 Portsmouth was granted its first charter by Richard the Lionheart. It granted the town the right to hold an annual fair – the Free Mart Fair – which took place until 1847.

By the early 13th century Portsmouth was described as ‘one of our most important ports’. However, the population of Portsmouth was probably only in it’s hundreds. The main exports from Medieval Portsmouth were wool and grain. The main imports were wine, woad for dyeing, wax for candles and iron.

In about 1418 a tower was erected at the entrance of Portsmouth Harbour called the Round Tower. Cannons on it could fire at any enemy ship attempting to enter the harbour. In the 16th Century a giant chain was stretched across the mouth of the harbour. The winch was by the Round Tower. The chain could be lowered to let in friendly ships but raised to prevent enemy ships entering the harbour.

In 1494 King Henry VII strengthened the towns fortifications by building the Square Tower. Henry also changed the destiny of Portsmouth when he built a dockyard and the first dry dock in the world in 1495. The dockyard was a place where royal warships could be built or repaired. From then on Portsmouth became Britain’s premier naval port. 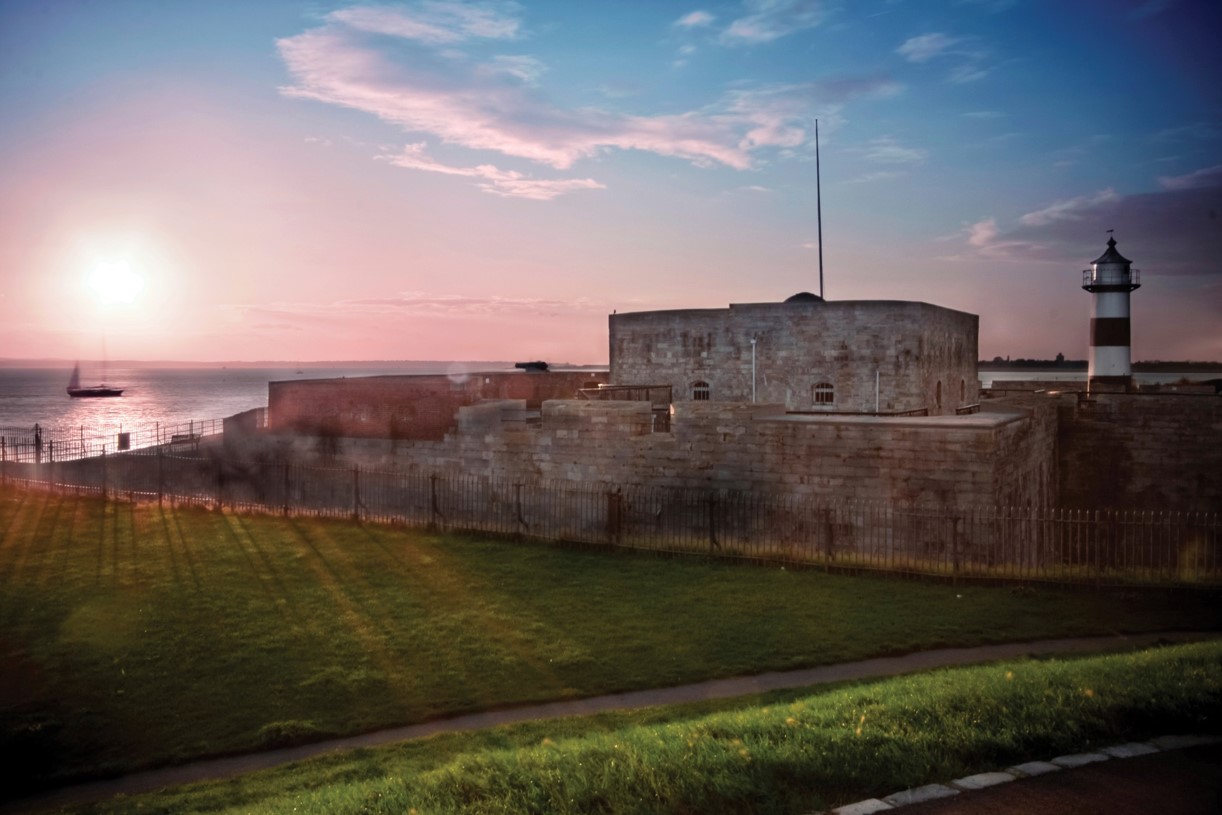 King Henry VIII also built a castle, east of Portsmouth, overlooking the sea. Southsea Castle, as it is called, was built in 1544. It is from the castle that Henry is said to have watched the sinking of his flagship, the Mary Rose.

The ship was to remain at the sea bed for 437 years until it was raised and put on an intensive conservation programme. Now the ship takes pride of place at the centre of its very own museum, where visitors can now see the ship in all her glory – even going through an air lock to breathe the same air.

Portsmouth grew at a fast pace during the Nineteenth Century. In 1878 the first public park, Victoria Park, opened. In 1883 Portsmouth gained its first public library followed in 1885 by the first telephone exchange. In 1894-96 streetlights in Portsmouth were converted from gas to electricity.
Portsmouth played a significant role in the First World War. Thousands of Portsmouth sailors were killed at the Battle of Jutland in 1916, and the city recruited three Battalions of the Hampshire Regiment, two of which served on the Western Front. After the end of the war the council carried out a number of unemployment relief schemes. In 1922 the council purchased Southsea Common, a stretch of land by the sea, and laid it out with gardens, bowling greens and tennis courts. 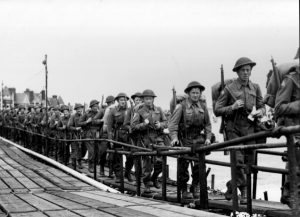 British soldiers, near South Parade Pier on Southsea seafront, about to board a landing craft to go to Normandy, June 1944. Image courtesy of The News, Portsmouth

The Normandy landings were the landing operations on Tuesday, 6 June 1944 of the Allied invasion of Normandy in Operation Overlord during World War II. Code-named Operation Neptune and often referred to as D-Day, it was the largest seaborne invasion in history and Portsmouth played an important role. The city was the headquarters and main departure point for the military and naval units destined for Sword Beach on the Normandy coast. As D-Day approached, the men began to embark for the cross-channel assault from South Parade Pier, the naval dockyard, Gosport, Stokes Bay and numerous other points along the south coast. Looking down from Portsdown Hill there were so many ships and landing craft that eyewitnesses said that it seemed as though it would be possible to walk from Portsmouth to the Isle of Wight across their decks. As hundreds of men marched through the streets many local residents said “we knew something was happening but we didn’t know what”.

During the Second World War Portsmouth was an obvious target for German bombing due to its role as a major naval base and almost 1,000 people were killed. About 10 percent of its buildings were completely destroyed, including the Guildhall. After the war the most pressing need was for new housing. At first Portsmouth council erected prefabricated houses. In February 1946 the council began to build more permanent houses, most of them off Portsea Island. A new estate was built at Paulsgrove, on the mainland northwest of the city. Another estate was built at Leigh Park about 10 miles Northeast of Portsmouth.

In the 1980s shopping malls were built, the Bridge Centre in Fratton and the Cascades in Commercial Road. In 1988 a new estate and marina was built at Port Solent North West of Portsea Island.

In the early 21st century Portsmouth is still a thriving city. Tourism is flourishing. In 2001 a new shopping centre opened at Gunwharf and the Emirates Spinnaker Tower opened in 2005.

Will you be part of the next chapter in Portsmouth’s story?

Portsmouth was the birthplace of Charles Dickens, and has also been home to Arthur Conan Doyle and Rudyard Kipling during their lifetimes. These literary greats are celebrated at museums throughout the city and with frequent events.
Location & Transport Living & Enjoying Industries & Sectors Employment & Learning