96% OF PEOPLE who responded to a call for local people’s views have supported Portsmouth City Council’s plans to build its first ever extra care dementia community in Cosham.

Shaan Novitzki looked at the plans at a public open drop-in session where local people also had the opportunity to speak to the architects and the council team.

”I think the plans for the dementia facility are fantastic,” Shaan said.

At the bottom of this page you’ll find artist’s impressions of the plans and a gallery of photos from the public open drop-in session. You’ll also find a page of feedback stats from the session.

Portsmouth City Council has proposed a brand new, modern, eco-friendly 50-apartment extra care community offering specialist care to people living with dementia. The proposed building would also offer accommodation for trained, skilled staff to make sure residents are safe and secure at all times and to provide onsite care and support should it be needed.

This will be the first facility of its kind that the council has built after the old Edinburgh House, on the corner of Southampton Road and Sundridge Close, came to the end of its usable life and had to be demolished in 2019.

Click here to see a time lapse video of the old building being demolished.

146 people gave their feedback through forms and an online survey, with 141 responding positively to the plans. Many agreed that it was a much-needed community, with comments praising the design and the quality of care that will be offered.

When asked what they would like to see changed, eight people suggested that Portsmouth needed more extra care facilities like this, and two raised concerns over its proximity to the new planned Cosham fire station on the next door PCMI site.

Project manager Oliver Willcocks said the planned extra care facility would offer vital extra care support for people with varying degrees of dementia, ranging from people who are very frail to people who are more active, allowing them to retain or regain as much independence as their physical and mental health allows.

“I think it’s safe to say that it’s the most positive feedback I’ve ever been involved with on a consultation event.”

The new development would also include a range of communal facilities to encourage residents to interact and to provide services that they would otherwise find difficult to access.

Cabinet member for health, wellbeing and social care Cllr Jason Fazackerley said: ”This facility would be a vital part of the council’s commitment to offer the support that the city’s ageing population needs.

“The public open drop-in session proved to be a great success.

“It was promising to see so many in attendance. We’re delighted that the local community are very much involved with these plans for the council’s first ever extra care dementia community, and we will keep up this level of public engagement as plans progress”.

The proposed building would be a flat-roofed part two-storey, part three-storey structure with a four-sided layout enclosing a central courtyard garden. The site would also include 24 extra car parking spaces, including three accessible parking bays.

The development would be wholly affordable housing and the apartments would be allocated to people, with a specific need, who are on the council’s housing register.

The public open drop-in session also featured plans on display for the new Cosham fire station, a new pavilion and artificial sports pitches at King George V playing fields, and improvements to Spur Road and Portsbridge roundabouts, as well as representatives from Switched On Portsmouth, who were there to find out people’s energy needs and to offer support, and Healthwatch Portsmouth, who were also there to offer support and find out about local people’s health needs.

To find out more about the plans for the Edinburgh House facility, contact project manager Oliver Willcocks at oliver.willcocks@portsmouthcc.gov.uk.

If you’d like to be added to the list of people we will keep updated on the latest news from the project; email strategic.developments@portsmouthcc.gov.uk. 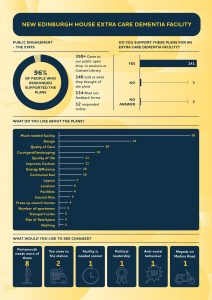